Looking for Your Next Adventure?

We're experiencing high telephone call volumes - we appreciate your patience. Due to COVID-19 we are experiencing shipping delays with our Parts and Accessories. Thank You

If you’re looking for a high-performance trail/enduro machine built to win, then you’ve come to the right place. Honda’s CRF250RX has the power, light weight, and refined handling of our championship-winning motocross bikes, but we’ve given it the touches an enduro rider needs with features like an 18-inch rear wheel, a bigger fuel tank, special suspension settings, a sidestand, and more. Lots of guys show up to the first check riding motocross bikes; the winners show up on a CRF250RX.

We’re talking about a special ECU program here: push the button to select the mode, hold the throttle open, release the clutch, and the CRF250RX will do the rest, launching you into the first turn with a big advantage. It turns your bike into a holeshot-seeking machine!

Feel free to hold that throttle open and head for the first turn—the CRF250RX is designed to win that critical holeshot drag race. You’ll also feel the increased low-end to mid-range torque.

The CRF250RX is equipped with an effortless electric starter. Convenient and lightweight, it’s a huge deal if you need to restart a stalled bike in the heat of battle.

The CRF250RX uses a double-overhead-cam (DOHC) engine layout with a unique finger-follower rocker design. Together with the rest of the engine’s architecture (bore and stroke, intake tract, piston, and more), you get more power and a higher redline.

The CRF250RX’s 79mm bore and short 50.9mm stroke let our engineers create a high-revving engine with plenty of room for large valves. The engine breaths and revs—the two keys to making power in the enduro world.

The CRF250RX’s large front-brake disc measures a whopping 260mm. You get great brake feel and a pattern that cuts down on weight. Front and rear brake-disc guards are part of the package too.

Certain features may require an additional add-on package that may not be included in the retail or sale price. Please contact the dealership for full details. 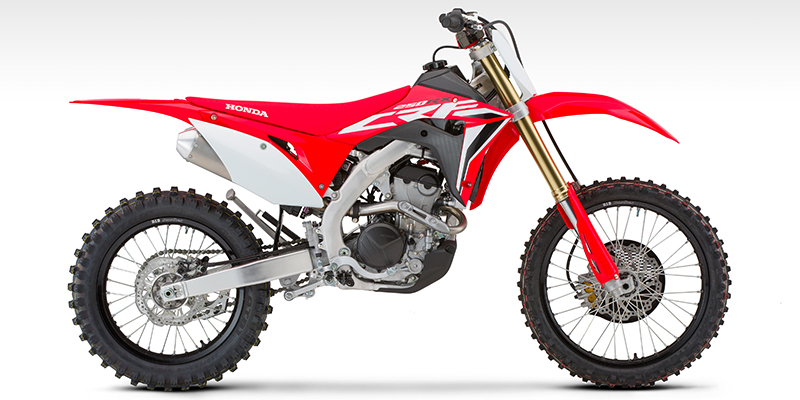 get a quote
Message Received - Thank You